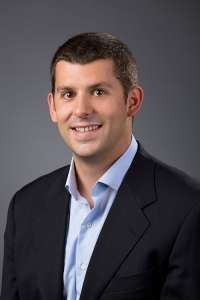 Dominick Lemas, Ph.D., received a 5-year, $755,785 K01 Mentored Research Career Development Award from the National Institute of Diabetes and Digestive and Kidney Diseases (NIDDK) to study how human milk and exclusive breastfeeding in the first year of a child’s life protects against childhood obesity. The NIDDK is part of the National Institutes of Health.

Pediatric obesity has more than doubled in children and tripled in adolescents over the past 30 years, affecting one in three children in the United States.

“It has become a public health crisis,” said Lemas, an assistant professor in the Department of Health Outcomes and Biomedical Informatics and a member of UF’s Institute for Child Health Policy.

According to the U.S. Centers for Disease Control and Prevention, 18.5 percent of children and 20.6 percent of teens in the United States have obesity. Common causes include genetic makeup, lack of physical activity and poor dietary habits.

However, researchers now are investigating a variety of other factors that may contribute to the problem, including the role of the human microbiome—the trillions of microscopic organisms that reside in the gut and elsewhere in the body, according to Lemas. Not only do these microorganisms help us digest our food; they also play an essential role in our health and development, helping to protect against allergies and other diseases.

At birth, newborns acquire microbes from their mothers and the environment. After birth, the microbes continue to thrive based on a variety of factors, including the food we ingest.

Recent findings have shown that certain energy-harvesting bacteria believed to promote obesity appear to be influenced by several factors in the early years of life, such as the baby’s mode of delivery (vaginal versus cesarean section, or C-section), maternal obesity, and breastfeeding.

For example, in the last two years, several researchers have reported differences in the microbiota of infants delivered vaginally compared to those delivered by C-section.

“We know that a lack of certain microbiota in C-section babies can result in increased rates of obesity, asthma and allergies,” said Lemas. “The next step in our research is to pinpoint which specific microorganisms aren’t being transferred and evaluate the plausibility of somehow restoring the microbiota.”

With his K01 award, Lemas plans to recruit a longitudinal cohort of mom-baby pairs to investigate how human milk affects the infant gut microbiome and identify the microbe-host interactions that occur in exclusively breastfed babies that may protect against obesity.

“Researchers have already demonstrated that exclusive breastfeeding is associated with protection against obesity during childhood,” said Lemas, “However, we don’t have a good understanding of how the components of human milk may be interacting with the infant’s microbiome to provide this protection.”

Lemas will use high-resolution mass spectrometry to examine elements in human milk and the infant microbiome in exclusively breastfed babies during the first year of life. The team will also explore whether vaginal and C-section deliveries and maternal obesity have an effect on the infants’ microbiomes.