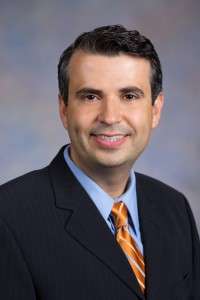 Ramzi Salloum, Ph.D., is co-principal investigator of a new four-year, $1 million (Canadian dollars) grant to conduct a multinational study in the Eastern Mediterranean Region on the economics of waterpipe tobacco smoking.

The International Development Research Centre (IDRC) and Cancer Research UK are funding the grant. The IDRC was established by the Canadian government in 1970 to support scientific research that advances the economic and social conditions of developing countries. Cancer Research UK is the world’s leading charity dedicated to cancer research, investing in translational, clinical, and population research projects around the world.

Salloum will collaborate with Rima Nakkash, Dr.PH., associate professor at the American University of Beirut Faculty of Health Sciences, to investigate how economic policies intended to curb waterpipe tobacco use will affect smoking rates, health-care costs, and public revenue in the region where waterpipe smoking originated.

“Waterpipe tobacco smoking rates in the Eastern Mediterranean Region may be the highest in the world, particularly among young people,” said Salloum, an assistant professor in the Department of Health Outcomes and Biomedical Informatics.

“The long-term goal of the project is to implement effective economic policies that reduce the burden of waterpipe tobacco smoking and improve population health throughout the Eastern Mediterranean Region and beyond,” Salloum said.

“Fiscal policies for tobacco control, such as levying taxes on tobacco products, are some of the most effective methods of reducing tobacco use,” said Salloum, who is also a member of the UF Health Cancer Center.

“Since most of this evidence comes from studying cigarette smoking, there is an urgent need for research to support fiscal policies specific to waterpipe tobacco smoking.”

Salloum is a health economist who specializes in cancer prevention and tobacco control. He is the recipient of two National Cancer Institute-sponsored fellowships: the Health Care Systems Research Network’s Cancer Research Network Scholars Program (2015-2017), and the Mentored Training for Dissemination and Implementation Research in Cancer Program (2016-2018).

The project will build upon ongoing collaborations in the Eastern Mediterranean Region to gather new economic evidence to develop waterpipe tobacco smoking control policies. Salloum will provide expertise on the economics of tobacco control, working closely with Nakkash and a multidisciplinary team of researchers in the Region throughout the duration of the project. The team will develop and evaluate strategies to help educate government agencies, policymakers, and advocates about the economic impact of waterpipe tobacco control policies.